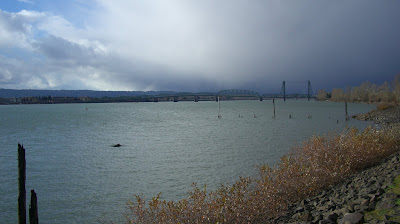 A year ago, I was packing for Bush Alaska. I flew into a village in Jan 2008 and got out of an airplane in minus 25 degree weather. I was scared shitless when I stepped out of the airplane - what the hell did I get myself into? I was on the Yukon River by the Bering Sea. I was 8 miles up from the Sea. The Yukon in Jan had 3 Feet of ice and snow when I flew in. I settled in, taught and time flew by. I goofed off in the summer and decided to go to Juneau this year. I am now on vacation in Portland, OR. I will put a picture of the Columbia River on this later. The Columbia is comparable to the Yukon in size BUT THE YUKON WAS FROZEN SOLID from October to May.

The year 2008 produced new experiences for me. I feel very fortunate to have the opportunity to bounce around as I am presently doing. The best news of 2008 is Obama will be President. GW needs to go back to Texas! The country would have benefited had GW been in Texas the past 8 years.
Posted by Rich at 1:32 PM

I have wondered when you went to Alaska originally. I admire you for your bravery of just packing up and going to teach the young children of Alaska. Many people are not brave enough to do that.

I too am looking forward to change in 2008. It feels good to get a new president and is a fantastic way to start off the new year.

Enjoy the rest of your time in Oregon.

Not Bravery - foolishness. I had not worked from June to Jan and decided to try something new, which brought Alaska to the front. I then talked to people in villages and thought - why not. It is not your lower 48 type experience though.

Oregon is back to being Oregon weather - mild 40s.